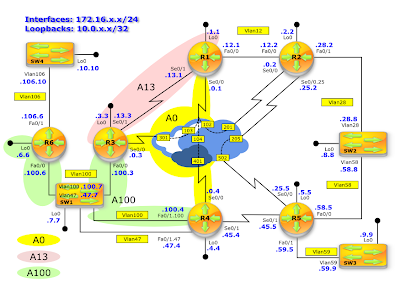 Task 1
Configure R3 to be the DR and R4 to be BDR in Vlan 100. Do not shut down any interface, reload any of the devices or clear OSPF process on any device to accomplish this.

Before we start the configuration, let's see what the current state of things regarding DR/BDR in Vlan 100 is. Do not worry if your output is different. Take a look at pic. 2.

Here's an interesting question for you: based on what Pic.2 represents, would you be able to tell which device is the DR and which is the BDR in Vlan 100 (FastEthernet0/0 interface)?

Stop reading now, and give it a shot! If you can't answer the questions, read on!


Most likely, R6 who's the neighbor of all of them is the DR in Vlan 100. In order to support this hypothesis, let's prove it it in two different ways:

Clearly, OSPF neighbor output on R3 confirms that R6 (10.0.6.6) is the DR. You can also check the status of OSFP interface on R6, like shown below: 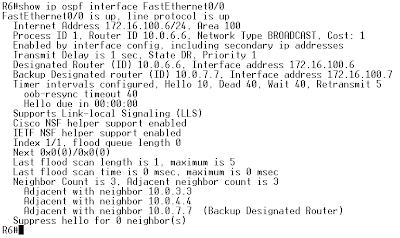 The 5th line of the output says: State DR.

Now, recall that the purpose of DR/BDR roles in broadcast and NBMA network is to reduce the number of LSA exchanges. The exchanges must happen between all neighbors in FULL state. In the aforementioned networks, FULL adjacency is built only with DR/BDR, so DR becomes the only representative to send update on behalf of other routers. Both DR, and its sidekick, BDR must have layer 2 connectivity to all OSPF enabled routers in the same broadcast/NBMA network. If the routers are in the same Vlan this is not a problem. But consider Frame-Relay hub-and-spoke topology in which there is not layer 2 PVC provisioned between spokes. In such situation only the hub router can become DR (has layer 2 connectivity with all other routers) and spokes should never become BDR. We will take a closer look at this after we have solved the problem presented in the task 1.


However, the thing to realize is that the DR role does not allow preemption. Once the router is elected DR it will stay as such even if we introduce a router with higher priority later (after the election has been completed). Only its failure or bringing its interface down will result in re-election. This means that election of DR/BDR may be unpredictible at times


Task 1
Configure R3 to be the DR and R4 to be BDR in Vlan 100.  Do not shut down any interface, reload any of the devices or clear OSPF process on any device to accomplish this.

In my case, R6 is still DR (non preemptive role)

Now, in order to create re-election, as per the stipulation, I will make R6, R4 and SW1 temporarily ineligible of becoming DR/BDR by introducing OSPF priority 0 on their respective interfaces, and then after few seconds bringing the default priority of 1 on them.

Now, let's put thing back to where they should be.

What You Should See
With this little acrobatics we should complete the task properly. Here's the result:

Study Drill
Let's tinker with Frame-Relay network and the problem of just having DR (R1) with no BDR. Let's leave the election of DR/BDR without interfering (all routers have default OSPF priority 1). Shut the interfaces down and bring them back up. 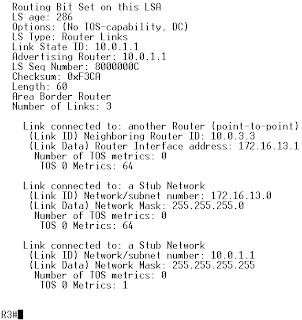 It will still be available on R4 though.

Even though R3 could have reached 10.0.1.1 through R1, it does NOT know the second path exists. The reason is, that current DR on Frame-Relay link is R4. This one cannot send LSA about 10.0.1.1/32 towards R3 since it has no layer 2 connectivity withR3!

This little study drill clear proves that in a hub-and-spoke topology, the DR should be the hub router. In order to avoid the situation that the spoke becomes the BDR, they should always be DROTHERs.